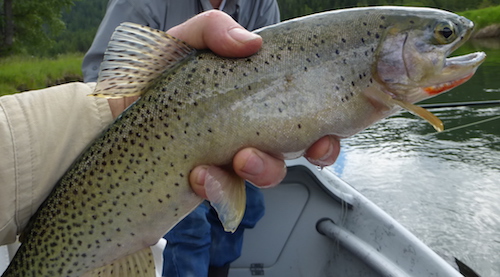 The fighting Cutthroat did not come out of the water easily. And when it finally was lifted out, the battle scars of the wounded warrior seemed to show in its dusky cheeks and the red slash under the lower jaw. It appeared as if a red badge of courage. The angler had respect, and gently released the fish back into its murky world.
The honor of Montana’s State Fish is not given easily. The two sub-species awarded this status are the...

Westslope Cutthroat (Salmo clarki lewisi), and the Yellowstone Cutthroat (Salmo clarki bouvieri). Cutts, as they are called locally here in Kootenai Country Montana, usually have small teeth at the base of the tongue that can be tricky to see but can be felt with a finger. Characteristically, they lack spots on the lower fins and spots on the head are most often above the eye. Appearing like the makeup of an actor, there are two dusky blotches on the cheeks and red slashes on the lower jaws which aid in identification. These crimson slashes register weakly on juvenile fish. Hybridization between the two, variations in color, and various spotting patterns can make exact identification tricky, especially at certain times of the year. Some crosses occur with Rainbow Trout (Salmo gairdneri) also.     Typical habitat requires cool clear waters in mountain lakes, streams and rivers. Westslope Cutthroat are native west of the Continental Divide, and Yellowstone Cutts are native to the Yellowstone River drainages. Most often stocking in northwestern Montana is in concert with Rainbows, Brookies, some Golden Trout and occasionally Arctic Grayling. Diet is mainly aquatic insects, aquatic invertebrates and terrestrial insects. Caddisflies and midges are also important food sources. Nests, or redds as they are called are usually built by the female with her body fanning out a depression in the gravel and sand and is vigorously defended by both males and females.
Fly-fishers have good luck with dry flies including elk hair caddis, royal wulff, grasshopper patterns, and ant imitations. Wet flies are fished just under the surface to imitate insects coming up to the surface, or a little deeper. Local fly fishing addicts advise to strip the line slower than usual. Spin fishers sometimes use clear bobbers that can be adjusted for weight by adding a little water for needed casting weight. Popular successful lures used in our area include Panther-Martins, Mepps, Thomas-Buoyant, and Kamlooper spoons at 1/4 oz. weight with 6-to-8 pound line. Live bait fishing folks can often score trout species with a grasshopper or night crawler fished 2-4 feet below the bobber with a small split shot attached.
Like the good folks of Kootenai Country Montana, our local guides are friendly, professional, and really want residents and visitors alike to catch fish and have fun. So get out on the waters of one of the most beautiful areas in our country, and catch a few of our Montana State Fish!
(Author’s Note: References - I.D. of Montana’s Sport Fishes; Native Trout of Western North America - Robert Behnke.) (See fwp.mt.gov. for seasons and regulations.)