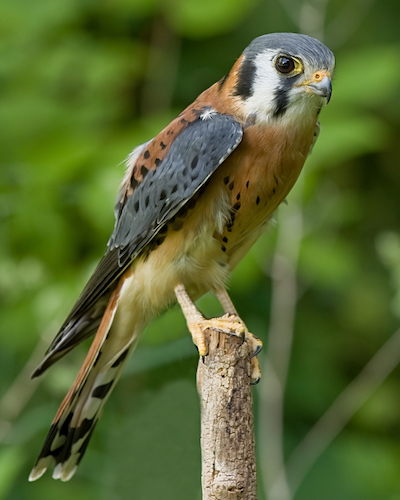 The American Kestrel speeds like a dart out of the sky in Kootenai Country Montana, a quick flash of slate blue, chestnut and rufous is often all one sees. If we are lucky, we might get a better sighting as this falcon sits atop a fence post, power pole, or dead snag. It hunts the edges of meadows and grasslands near the timbered edge. It hunts often in the open, and can be seen hovering in midair. Its prey includes insects, grasshoppers, small birds, rodents, and snakes. Falcons hunt in dives faster than a speeding bullet. This falcon is no exception...

Adult males are slate blue on their wings and the crown of their heads.  The back is rufous with distinct dark brown horizontal barring. The tail is uniformly rufous with a black band on the end. The breast is buff-to-cream with light, vertical streaking. The female is uniformly rufous on the back and wings with dark brown horizontal banding. Both sexes have a dark vertical stripe below, in front of, and behind the eye, with an additional dark stripe further back on the head. Their appearance is striking!

Kestrels are about 10-inches in length, and have a wingspan of approximately 22-inches. They are a generalist as far as habitat goes, and nests are often located in cavities in trees, banks, cliffs, and buildings. Male kestrels arrive at nest sites before females. A prolonged and quite often noisy courtship follows in May which results in an average of 5-eggs which hatch after about 30-days. The young usually fly at about a month old. Parents and young often remain together for a month or so after leaving the nest.

So keep your eyes on the horizon and on top of the fence posts and power poles. This streak of colorful power is notable as it hunts the meadows and edges preying on songbirds and insects during summer months. If your fast, you might get a really nice photo of this falcon in flight. If not, it still is nice to know that this smallest member of the falcon family patrols the skies of Kootenai Country Montana!