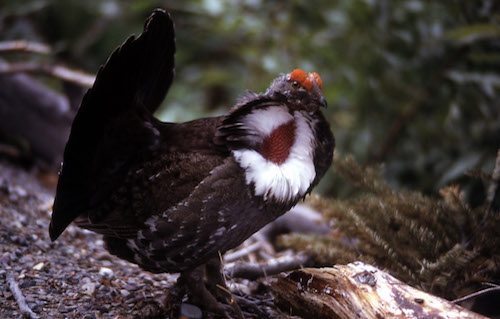 Named for the males slate colored upper parts, the Blue Grouse is the largest of Montana’s three species of “mountain grouse.” High in the sub-alpine zone, a wintering Blue Grouse nestles in a depression that is hidden from view of any potential predators. And hide it must. Grouse species are preyed upon by a plethora of animals and birds. In the higher country of its winter and summer ranges, there are a few less predators than at lower...

At lower elevations, this list of predators would include coyote, red fox, bobcats, cougars, and even occasionally badgers. Of course, humans are included in this list as grouse species are prized game birds for their delicious breasts. Native Americans hunted them for sustenance and their decorative feathers.

Blue grouse and Dusky grouse are closely related species that have been generally considered the same, but more recently separated as individual species. The blues (Dendragapus obscurus) are a large grouse with the male having slate colored upper parts, a white based arrangement of neck feathers around the air sacs, and yellow-orange eye combs. Females are browner than males and have barring on the head, neck, and back. Both sexes have blue-gray breasts and bellies with feathered legs. Adults range from 16-24 inches in length and weigh in at about 2-pounds.

Blue grouse winter at higher elevations in conifer stands of whitebark pine, fir, and mountain hemlock. They may come down in elevation during spring, but usually return to higher altitudes during the heat of summer. Forest edges and openings may be utilized. Diet consists of pine and fir needles, berries of the huckleberry family, chokecherry, snowberry, bear berry, green plants, insects, beetles and grasshoppers. Grouse utilize small rocks or pebbles in unison with their craw, a small muscular organ at the base of the neck to grind up large foods.

Mating occurs March to July, and males sometimes attract females and defend territories by fanning out the long square tail, hopping and clapping their wings. Males either perform this method, or lekking. Lekking is where the males gather in an area to challenge each other for females. They may also go out on their own in search of mates. The males also hoot in females and “drum in” partners. Often, males will continue to hoot and drum into mid-summer to attract females that may have lost their clutch and are willing to mate again. Usually, 7-10 eggs are laid and hatch in May-June. Grouse are an important prey species, and often only 50% of young survive. Grouse may live a 3-to-14 year life span.

Fall hunting season brings the bird hunter into higher elevations for this species of grouse. Check with local Montana Fish, Wildlife and Parks at: fwp.mt.gov for specific seasons. So explore the beautiful mountains of Kootenai Country Montana for blue grouse and you may take home a tasty natural dinner treat as well!