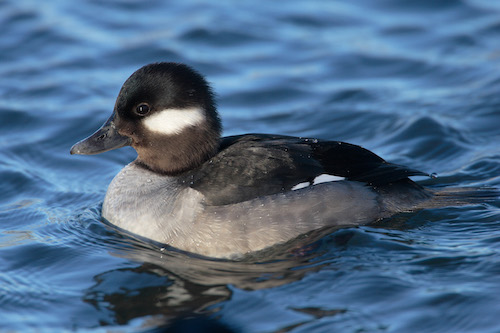 The winter birding class spotted a small group of active Bufflehead ducks diving for food along the edges of the Kootenai River. What seemed to be a black and white head caught their eye. Setting up the spotting scope, they zoned in on the striking plumage of the head of the male. It was a work of nature’s art, with a rainbow like iridescent green and purple array, and a large white patch...

The Bufflehead Duck (Bucephala albeola) is quite popular with birders. The scientific name comes from a Greek and Latin combination term meaning buffalo headed, whitish duck. Also known as the Spirit Duck, this buoyant, small bodied, large headed duck quickly disappears and reappears as it feeds. This smallest North American duck exhibits a black and white contrasting pattern in flight. The back and wings are blackish, with white scapular and wing patches. Average length is 14 inches.

These ducks are most often found on freshwater ponds and small lakes. They are also found on larger lakes and rivers. Bufflehead’s generally prefer shallow, sheltered coves, and slower moving waters. Look for them during spring or fall migration times on major rivers and lakes in ice free zones. These are diving ducks that forage underwater for crustaceans, mollusks, and fish eggs. The Spirit Duck also harvests insects and aquatic plants.

The Bufflehead’s are somewhat unusual as they are monogamous ducks. Females will return to breeding sites yearly. This species most often nest in tree cavities of aspen or cottonwood trees, usually in old flicker or pileated woodpecker nests. They will lay an average of eight eggs. Their small size is an advantage here, as they can fit in holes too small for Goldeneye ducks, who do compete for larger nesting holes and have actually been known to kill Bufflehead females and their clutch. However, there are other nesting competitors including mountain bluebirds, tree swallows, and starlings.

The courtship display of this species is also unique. The males will swim in front of the females, and quickly bob their heads up and down, repeating this behavior to catch the females’ attention. The flight pattern of these ducks is also distinctive, as the wing beats are extremely rapid, and they rock side to side as they fly. Spirit ducks will often reside year round in Northwest Montana. Generally, they do not group into large flocks, but rather will form smaller groups when gathering together. Interestingly, at times a lone duck will function as a lookout, alert for predators while others dive for food.

As far as predation is concerned, both weasels and mink will take these ducks in the nest or on the water. Aerial attacks are common also, most often by Bald and Golden eagles. At times, peregrine falcons, red-tailed hawks, Cooper’s hawks, great horned owls, and even snowy owls irrupting will harvest these ducks. In Kootenai Country Montana, the life of a duck is not always easy. All the more reason to appreciate a sighting of these rainbow headed beauties!