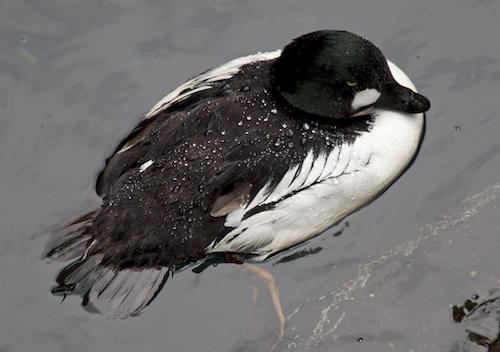 The experienced wildlife photographer knew the timing was right. It was mid-November and ice was beginning to appear on the water bodies of Kootenai Country Montana. Just around the edges of a forested bay, several goldeneye ducks seemed to walk on water and launched into a whistling flight. The photographer shouldered his camera, took aim and captured the ducks in mid-flight...

The Common Goldeneye’s common name refers to its tawny colored irises. The two-part scientific name comes from Greek and Latin. The old Greek word boukephalos is in reference to buffalo headed, and the term clangula is Latin for small noise, which ties in the whistling sounds these ducks’ wings make in flight.

This is a medium sized diving duck with a stocky appearance. The neck is short, the bill grayish-black and the body roundish. The contrast of a breeding males iridescent green-black head with its bright white oval shaped patch at the posterior base of the bill is diagnostic. These ducks have white flanks, breast, and belly which also contrast with a black back, wings, and tail. Female adults have a chocolate brown head, dark gray back, wings and tail. Both sexes show quite a bit of white in flight, and have eyes that appear golden like in color. These ducks are also characterized by a flight pattern of rapid wing beats with a moderately deep arc that produce whistling sounds. They measure between 16-20 inches, and weigh about 2 pounds.     Habitats of this species include forested bays, lakes, deep marshes and freshwater habitats, deciduous cottonwood stringers, and edge effects adjacent to water bodies. The diet mainly consists of aquatic insects, crustaceans, aquatic plants, mollusks, small fish, and other plant materials. Goldeneyes are cavity nesters with a strong homing tendency, often using the same cavity in successive years. Nests are usually located within one mile of wetlands, ponds, lakes or rivers. Most often, they utilize natural tree cavities, abandoned woodpecker holes, and sometimes will use artificial nest boxes. They line the nest with woodchips and down, and lay an average of nine eggs.

Fall migration usually peaks in November, and spring migration peaks in April. Some goldeneyes migrate through, and many stay the winter. Male Goldeneye Ducks have a spectacular spring courtship where the male gives off a shrill jeee-up call. The male starts his romancing by jerking and thrusting his head forward as he swims around the female. He will then tilt his head backwards on to his back with his bill pointing towards the sky, and repeat this many times. Drakes will also kick both feet to the rear, while splashing water into the air! Hens who may be impressed by this display might follow and duplicate some of his moves. A wildlife photographer able to capture these displays would indeed have another unique treasure of Kootenai Country Montana!