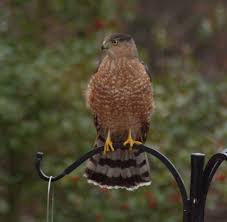 Behind the scenes of everyday life in the woods, the raw and brutal reality of existence in the wild is not always a pretty one. Here, hawks such as the Cooper’s Hawk, maneuver through minute spaces between trees in rapid flight to prey upon songbirds sometimes miss their mark and end up with broken chest bones. The balance between predator and prey usually finds equilibrium, as the cycle of life and death continues...

The Cooper’s hawk (Accipiter cooperii) is a medium size forest hawk about 14-22 inches in length and a wingspan of about 25-35 inches. Adult males are steel gray on the back, with a black crown and a pale neck and face. The belly is white with clearly visible horizontal reddish bars which extend from the neck to the tail and legs. Adult females have a bit more brown on the back. Adults have reddish irises. The rounded tail is darkly barred, and the call is a series of kek kek kek sounds which are somewhat distinctive.

Cooper’s hawks are named after William Cooper, a scientist and researcher who collected specimens of this hawk that were used to characterize, identify, and name this bird of prey. Coop’s occupy dense cover of both deciduous, evergreen, and mixed forests. Often, draws and riparian areas are used. These predatory hawks hunt forest edges, small openings, and larger expanses of open country. They are known to utilize rural outskirts and occasionally bird feeders especially in winter.

Some of these hawks will stay the winter if the food and territory are sufficient. Migrating birds arrive in late March or early April. Clutches of 2-6 eggs are laid around mid-May. The incubation period is approximately 32 days, and the young fledge at about 30 days after hatching. Courtship displays may include both sexes flying over core territory with slow, deliberate wing beats. Usually, the male feeds the female a month before she begins laying eggs. Nesting site is most often 20-60 feet up in a tree placed upon an old bird or squirrel nest, clump of mistletoe or in a broken snag.

Coop’s usually take small to medium sized birds such as robins, flickers, woodpeckers and grouse. They will also harvest small mammals including chipmunks, tree squirrels, mice, bats and ground squirrels. Occasionally, Cooper’s hawks will prey upon American Kestrels and Sharp-shinned hawks as they represent a competition for food sources. Rarely, frogs, salamanders, and snakes may be part of the diet. In turn, several other raptors may take Cooper’s hawks including Great Horned Owls, Goshawks and eagles. The Coop’s is a species of special concern in Montana.

The hunting methods employed by this hawk include several stealthy techniques. The perch and pounce relies on moving from perch point to perch as they listen, scope, and then fiercely attack. They will also approach through thick cover with a glide and powerful pursuit flight that ends with a deathly talon grab. These predators capture birds with their feet and kill by repeated squeezing, holding the prey away from their bodies until it succumbs. Infrequently, Cooper’s hawks will drown prey, holding it under water until the balance of predator/prey relationship is satisfied in Kootenai Country Montana.