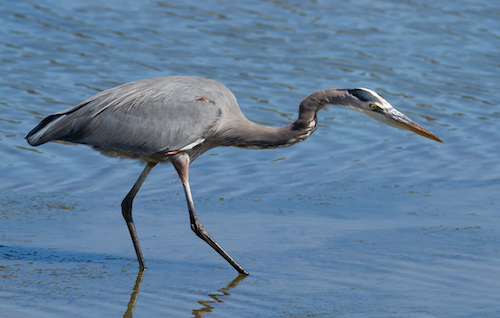 The outdoor educator was leading a spring birding and animal tracking class. He was crawling around a bend in the river, when he was taken by surprise! Above him not eight feet away, a large great blue heron loomed five feet above him. The bird of prey was obviously agitated, as he loudly emitted a K-raaaak sound, and his eyes glared fiercely. Head plumes erect, wings spread out completely, the raptor made spear like lunges towards the intruder with his lance-like bill...

Great blue heron (Ardea herodias) can reach 5-feet tall, with a wingspan of six feet. In late March to April, they frequently display a courtship-defensive behavior that can be fairly intimidating. The upper parts are gray-blue, and the front of the neck is streaked with white, black, and a rusty coloration. They have a long, yellowish bill, and lengthy brown-green legs. When in flight, they will fold their neck into an S shape and extend the legs out along the body axis. Wings are very long and have rounded edges, and in flight the wing beats are a deep, slow movement. Great blue’s are the largest North American heron. Head and neck plumes can be raised and flared out when excited or alarmed.

Herons utilize a relatively wide diversity of riparian, wetland, and wilderness habitats. They are generally within proximity of a clean water source that supports healthy fish populations. Nesting colonies are often along riparian cottonwood stringers near major rivers and lakes. This species usually choose areas with large diameter nesting trees, and stick nests are built. Heron rookeries may contain 12-to-150 nests, and are sometimes taken over by double-crested cormorants that simply overwhelm the herons with vast numbers. Diet consists mainly of fish, with additional frogs, snakes, salamanders, turtles, young birds and bird eggs, crustaceans, insects, mice, voles, and other small mammals.

Great blue herons usually hunt by a stalk, still hunt, and strike method. The strike is remarkably fast, extending the long neck and striking with the spear-like bill. Males usually build nests, and perform courting displays, at times offering a stick to the female. Males may exhibit a stretch, where they lift the head and bill skyward, coooing and swaying. They also will stick the necks strait out while snapping their beaks, and may initiate sword play with females. Great blues are both diurnal and nocturnal hunters, having high counts of photo-receptors in their eyes which aid in night vision. These herons have specialized vertebrae in their necks which allow the S shape in flight, and powder producing feathers that assist in grooming.

Predators include large raptors, bobcats, and coyotes. Eggs are vulnerable to crows, gulls, ravens, fox, and raccoons. It is highly recommended not to interfere with the many great blue herons here in Kootenai Country Montana, as they can be quite dangerous!