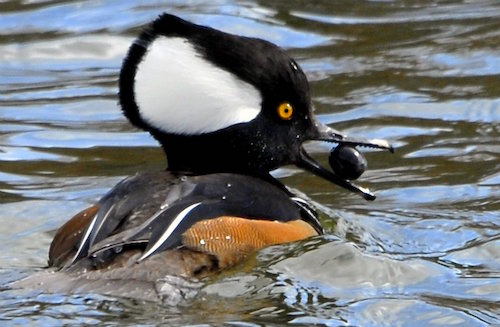 The Plein Aire Artists group had just finished setting up on the lake of the bull moose in Kootenai Country Montana. Hearing what they thought was a frog, they peered into a tiny bay area. A beautiful pair of hooded Mergansers were coming towards them. They grabbed their charcoals and brushes, and began to illustrate what their eyes were taking in...

Most notably, the artists were impressed by the ducks’ characteristic fan shaped crest. As they sketched and painted, they noticed these ducks could both collapse and puff out these noble crests. With the artistic eye, they outlined the large elongated appearance of the heads, which scale wise, made the heads look dis-proportionally large in comparison with the bodies.

The adult male hooded merganser has a white fan-shaped crest which contrasts with its black head feathers and bright yellow eyes. The chest is white with two black stripes, the head blackish, the flanks rusty brown, and the rump and tail are dark gray and brown. The female adult has a reddish-brown crest, chocolate brown eyes, a yellowish lower jaw (or mandible) and grayish-brown plumage on the body. In flight, both sexes show black and white flight feathers. Average length is 15-19 inches.

In Northwest Montana, this species (Lophodytes cucullatos) is closely connected with a variety of forested wetland and riparian systems. These may include association with coniferous, deciduous, or mixed forests. Habitat types include small lakes, beaver ponds, wetlands and adjacent ponds, forested creeks, and at times larger lakes and rivers. Clear water and healthy fish populations are a necessary component. Hoodies diet is mainly fish, crayfish, frogs, crustaceans, aquatic insects, and some plant materials.

Courtship displays are elaborate, as the males throw their heads back and make a creaking frog-like call. Females also court males by bobbing their rusty reddish heads and emitting a frog type sound. After mating, the male will make a ritual swim around the female. Nests are made in tree cavities near woodland ponds or small lakes. This species will utilize wood duck nesting boxes, and artificial nest structures. Most nests are within about one third of a mile from water bodies. Hooded mergansers will exhibit brood parasitism, where females will lay their eggs in other female mergansers nests.

Hooded Mergansers eyes are specialized and adapt underwater to help them locate fish and other prey. In flight, these smaller ducks have shallow, rapid wing beats that make a whirring type of soft helicopter sound. This species of ducks also have specialized bills that are hooked and serrated for catching and eating fish! Many of these ducks overwinter in Northwest Montana. Some are presumed to migrate to the west coast. General migration times are spring periods of late February to early April, and fall time slots are from September to late October.

The Plein Aire caricaturists did their best to capture the natural beauty of the hoodies striking plumage and impressive fan shaped heads. They smiled to themselves, knowing they were extremely lucky to have witnessed another exceptional wildlife sighting in Kootenai Country Montana!