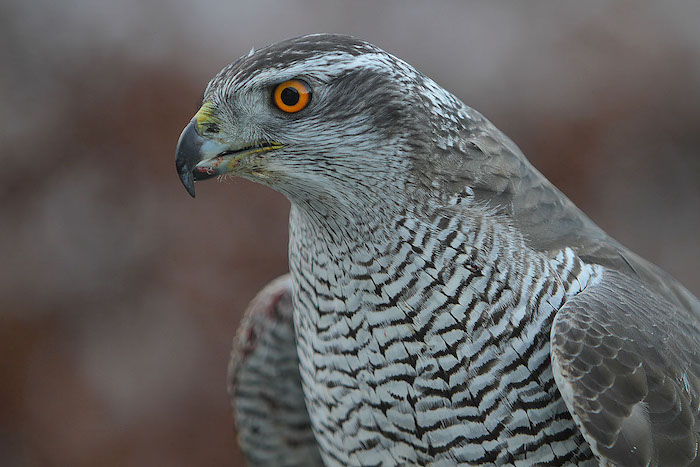 Along one of the major creeks flowing out of the East Cabinet Mountains in Kootenai Country Montana, a young forester was at work. He was performing an old-growth timber survey in a remote, dark stand of trees. As he finished writing up the information, he began to raise up from a one knee position. Out of the corner of his eye, he caught a large battleship gray bird of prey — the Northern Goshawk — that swiftly angled its flight towards his head in an attack mode as he...

instinctively ducked. The large bird landed in the branch of a huge spruce tree, and he was able to more closely examine the predator. The height was about 24 inches, and the wing span he judged at 40 inches. The magnificent bird was slate gray above, and silver white below with a broad dark banded tail. There were thick silver stripes extending from the back of the head to the eyes. The eyes were orange-red, and were looking straight at him.

The Northern Goshawk (Accipiter gentilis) is a bird of the deep forest edges. The female is slightly larger, with a more brownish color, and brown streaking on the breast. Their habitat usually is old growth, mature, or late successional stages of forest with large diameter trees and high canopy closure. They reside mostly in coniferous forest, but may utilize mixed deciduous and evergreen stands.

Goshawks exist by being able to precision hunt these areas and have less competition here from other raptors. Somehow, they can magically maneuver through the somewhat open understory and only occasionally use more open areas where other birds of prey hunt. Northern Goshawks take tree squirrels, flying squirrels, ground squirrels, western cottontail rabbits, snowshoe hare, blue grouse, ruffed grouse, spruce grouse, American Crows, Stellar’s Jays, and gray jays. They also zone in on members of the tree clinging birds such as American Three Toed Woodpeckers, black backed woodpeckers, hairy woodpeckers, northern flickers, pileated woodpeckers, Williamson’s Sapsuckers, and once in a while American Robins. Hunting strategies include perch and ambush, as well as angling flights through timber, forest edges, and small openings.

These Accipiters often nest in trees where the branch meets the trunk of the tree. They construct moss and vegetation lined stick nests and may switch around between several nests in their territories to reduce exposure to disease and parasites. Usually, they occupy nesting territories by late March, and an average of four eggs are laid in May. Goshawks often use plucking perches where they pluck their prey before taking it to the nestlings. These birds are considered a partially migratory species, and may migrate long distances, make short winter movements to lower elevations, or may remain all winter if food and territory needs can be met. Northern Goshawks are vulnerable to predation from red-tailed hawks, short eared owls, great horned owls, pine martens, fishers, wolverines, coyotes, great gray owls, bobcats and raccoons.

While you are exploring Kootenai Country Montana, walk softly through the deep woods and keep your eyes peeled for this species of special concern. Be aware that they live and hunt here, and by the way, don’t forget to duck!     (Author’s Note: Reference- Montana’s Birds of Prey, DuBois and Becker.)