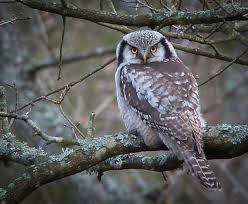 The wolverine researcher slogged through the wet snow of Kootenai Country Montana, and his snowshoes felt heavy. Looking up, he noticed a bird of prey that appeared half hawk and half owl. In its perch atop a large spruce tree, the head appeared round but yet squarish. This bird of prey had a facial disc like an owl, but a long tapered tail like a hawk. The field biologist took out his binoculars and studied the features more carefully...

The bird sized up about 18-inches high as it perched, its white eyebrows showed distinctively and the forehead looked spotted. The facial disk seemed white with a thick black border, and the yellow of the eyes and beak stood out against the cloudy sky. The broad chest appeared to have heavy dark brown horizontal barring from the neck to the undertail. The wildlife researcher observed the folded short pointed wings, and as it turned its head he noticed a black V-shaped pattern on the back of the neck. Hawk, owl, or falcon, he would figure it out back at the bunkhouse. The dampness chilled his bones and the dusk was beginning to welcome the dark.

The Northern Hawk-Owl (Surnia ulula) is a rare winter visitor to Montana. This owl is usually found in northern coniferous forests to the tundra edge. Irruptions of this species occur when food sources grow minimal up north, and the hawk-owls travel south into northwest Montana. This is a very vocal owl, with three more common calls. The first is the ululululu call that is whistle like and lasts about 10 seconds each sequence. The second can be heard when the bird is perching at potential nest sites and is a tu-wit-wit sound, and the third is a danger alarm that beckons rike-rike-rike!

The food habits are to take small mammals such as mice, voles, squirrels, weasels, and small birds, spruce grouse, pileated woodpeckers, sparrows, jays, finches, and occasionally fish, frogs and salamanders. Hawk-owls are usually diurnal hunters, but may exhibit predatory behavior during dawn and dusk, daytime, or after nightfall. This species most often employs a perch and post method of hunting, moving from one hunting point to the next. When prey is spotted, it will attack with an extremely fast flight and is capable of catching birds in the air. At times, this predator utilizes excellent hearing and a typical owl strategy of locating prey by sound and will either talon grab or assault its audio target with its head and beak. The hawk owl undertakes some interesting courtship displays where pairs call in duet, and often bow stiffly to each other! The male feeds the female, and will cache uneaten prey near the nest.

Before he made it to the bunkhouse, the lone cold snowshoe clad researcher had figured that it could be a Northern Hawk-Owl, the strange combination of nature’s adaptations of hawk, falcon, and owl that occasionally came down to Kootenai Country Montana and visited for a while. It must have felt at home here in remote evergreen based, turquoise river laced, remotely spaced, northwest Montana. We sure do.