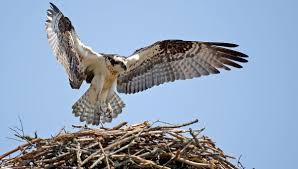 The fisher woman was not having much luck as she tied on her sixth different fly. From the overcast skies, she caught a glimpse of a fish hawk who appeared suddenly and dove quickly into the nearby waters. Rebounding from the plunge, the Osprey arranged the catch head first in its unique talons and flew off. The woman smiled, and made another cast...

The name Osprey is believed to stem from a medieval Latin word avis prede, meaning bird of prey and a Latin term ossifraga defined as bone breaker. Ospreys are dark brown above and whitish below and have a barred tail. The head is white with a distinctive brown eye stripe extending from the eye to the shoulders. Females and immature birds have brown streaks on the breast. Juveniles have light feather edges on the tops of their wings showing a mottled look. From below, the wings look two toned, with white along the leading edges except for dark wrist patches and brown barred flight feathers. The wings are long and narrow, and bent at the wrist when soaring. The wing span is about 50-75 inches, and the overall length is approximately 20-25 inches. The distinctive call is a loud whistling and at times chirping sounds.

Ospreys are quite unusual among hawks in having a reversible outer toe which allows them to grasp with two toes in the front and two behind. There are also barbed pads on the soles of the feet that enable them to grasp onto slippery fish. Usually, an osprey will reposition it’s catch head first, which assists the bird when carrying prey in high winds. As far as habitat, ospreys nest near large lakes, reservoirs, rivers and wetland edges. These fish hawks most often only dive two to four feet underwater, and generally will fish more shallow water. However, they will frequent deeper water if fish are schooling near the surface.

The diet is mainly all fish, a large proportion of these being rough fish such as suckers. The average size of fish caught are usually 6-14 inches in length. The fish hawk’s success rate for dives and catches ranges from 25-to-75 percent, and is more often in the higher end of that range. Although diurnal and piscivorous, ospreys will rarely also feed on fish carcasses, birds, salamanders, snakes, voles and have been recorded taking muskrats. Their vision is well adapted for detecting underwater objects, and the nostrils can close for diving. Eagles and ospreys at times battle for food, and some confrontations do occur.

Osprey nest in live trees, snags, and quite often in man-made structures, as well as specialized platforms designed to assist fish hawks in nesting. Stick nests are constructed and lined with vegetation, with the male bringing in materials, and the female arranging them. Most of these birds of prey migrate south, but some are residents.

Males sometimes perform a sky dance referred to as a fish flight, with periods of hovering and slow swoops from hundreds of feet above the nest site. In the skies above Kootenai Country Montana, they have the advantage over the fisher woman spotting fish in the turquoise waters.