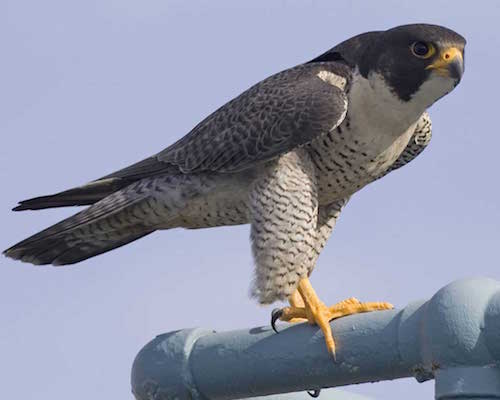 Inside rocky cliff edges and small caves, the Peregrine Falcon keeps a vigilant watch over the rivers, wetlands and lakes below. As a few scattered clouds roll across the azure blue skies of Kootenai Country Montana, they resize and reshape themselves magically. This sentinel is carefully observing songbirds, ducks, shore birds and waders in and near the water’s edge....

Historically, this species of winged sentinel has been spotted in at least three locations near the heart of Kootenai Country Montana: near the rocky outcrops and cliffs above Kootenai Falls, the sheer rock faces that characterize the location known as Bad Medicine Cliffs, and the boxlike cliffs and precipices above the Clark Fork River from Noxon to Thompson Falls.

The noble sentinel is a member of the Falcon Family. Falcons are characterized as fast flying birds of open country. Their reputation for attaining high speeds as they tuck in their long pointed wings and dive from high altitudes to knock unsuspecting birds out of the air is well known. Usually, falcons flap their wings almost continuously during level flight, and rarely soar. This captain of the cliffs is the Peregrine Falcon. The term peregrine refers to “journeying about from place to place.” It is in reference to this bird of prey’s habit of long range movements. Other names for the Peregrine Falcon (Falco peregrinus) include bullet hawk and duck hawk.

Adult peregrine falcons are blue to dark blue/black above and whitish to tan below with dark barring and whitish on upper breast and throat. Sexes are similar. Juveniles are brown above and tan to buff below. Feet are blue-gray on young birds and yellow on adults. Males average from 13-18 inches in length and have about a three-foot wingspan. Females range from 17-20 inches in length and have an average of 35-40-inch wingspans. Peregrines prefer open locations, especially swamps and wetlands for hunting. As far as nesting sites go, they prefer cliff edges and cavities. These falcons occasionally nest on buildings in cities or in trees. Historically in Montana, peregrines were distributed along major rivers and waterways. Adult birds arrive at breeding territories in the west in March and April. Courtship displays involve flight acrobatics and loud vocalizations. Incubation of clutches of two to five eggs are common and take from 25-35 days. Young leave the nest about 40-days after hatching, usually approximately early July. Diet consists of birds from the size of swallows to geese. Shorebirds are sometimes taken where they are abundant near nesting sites or migration routes.

Peregrine Falcons are listed as endangered species, breeding populations were believed to have become extinct in Montana by the late 1970’s. Major efforts to reintroduce captive-bred peregrines since then have shown promise. Migrants from Canada are often observed near high concentrations of migrating waterfowl.     So when you are scanning the skies of Big Sky Country, keep your eyes upon the rocky outcrops, cliffs and caves near our numerous waterways. You may be treated to a somewhat rare spotting of these nesting captains of the cliffs and acrobats of the sky.