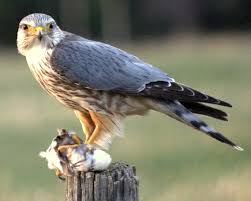 The common name of pigeon hawk was given to the merlin (Falco columarius), due to this bird of prey’s tendency to take small birds such as sparrows, finches, and waxwings. In reality, the pigeon hawk is not a hawk at all, rather it is the smallest member of the falcon family present in western Montana. This species is significantly smaller than its relatives in the falcon family such as gyrfalcons, prairie falcons, and peregrine falcons, but is just as stunningly beautiful...

The term merlin comes from Old French meaning small hawk. Both sexes are more uniform in color than the brilliantly colored American Kestrel. Immature merlins resemble immature sharp-shinned hawks, but have pointed wings and dark eyes, instead of the short, rounded wings and yellow eyes of the young sharpies. Falcons are fast flying birds of open country. They are known for attaining high speeds as they dive from high altitudes to knock unsuspecting birds out of the air. Falcons are noted by their long, pointed wings and relatively long tails which are generally folded as they fly. During level flight patterns, falcons usually flap their wings almost continuously, and they rarely soar.
Recently, local birders interests were piqued when one of our local birdwatcher gals had a merlin perched on a fence near her place of business just on the outskirts of town. Both merlins and sharp-shinned hawks are about 10-13 inches in length, and both have wingspans of approximately 18-24 inches. The merlin is listed as a species of special concern in Montana, and is not commonly seen. In the western part of the state, they most often utilize open stands of conifers and river bottom stringers of riparian forest, although at times they nest in urban areas as well. Their populations have increased in numbers in some parts of their range, and have expanded into new nesting areas which include the fringes of towns and suburbs. Most North American populations seem to be stable or are increasing. The pigeon hawks often remain near towns, relying on songbirds and house sparrows as prey. Sometimes diet includes larger insects such as grasshoppers and moths.

Hunting mainly takes place from a perch, then flying out to capture prey in the air. At times, it also hunts by flying low among trees or over ground nailing prey by surprise. These falcons actually seldom dive steeply from above to capture prey. Birds, insects, and bats are amazingly caught in midair!

If you are lucky enough to see a courtship display, the aerial show may include spectacular flight displays, steep dives, strong twisting flights, glides, rolling from side to side, and fluttering with shallow wingbeats. The male will bring and present food to the females. Nest sites usually are in a tree in old nests of hawks, crows, or magpies at 10-60 feet above the ground. Often, nests can be in tree cavities, on cliffs, or on the ground.     Carefully look for males to be blue-gray to dark blue above, and pale or rufous below with dark streaking or barring. Females usually are brown above, creamy below with dark streaks. Check for a barred tail, gray to white with a dark sub-terminal band. The eyes are brown, and the feet yellow. Juveniles of both sexes resemble females, but can be darker.

Once you check the field identifiers, think about habitats and remember they may be seen on the outskirts of our small towns in Kootenai Country Montana. You may just be seeing the falcon called the Merlin, and having a magical experience!