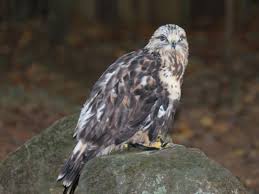 The winter birding group spotted the hawk in a slender treetop perch. The head was a whitish-tan, with a bib of the same color, and the tail had some dark barring above a terminal band. They set up the spotting scope, and noted a wide, dark brown belly band and the tan and brown feathers that extended all the way down the legs to the talons. The groups suspicions were confirmed, they were looking at a Rough-legged hawk, a visitor only during winters to Northwest Montana...

Rough-legged hawks (Buteo lagopus) nest in arctic regions and some migrate to our beautiful corner of the state. Both sexes have a chocolate brown back and wings, and in flight the undersides of wings are white with brown tips. Light phase birds usually have a dark chestnut patch about midway along the forward edge of the wings. Dark phase birds most often are chocolate brown all over, except for white wing undersides and a mostly white tail. These hawks range in length from 18-26 inches, have a wingspan of 48-58 inches, and weigh in at about 22-52 ounces. Although our visiting hawks can be tricky to identify, keep in mind the distinguishing characteristic of the feathered legs that give this Buteo it’s common name. Remember also, that immature golden eagles are larger and have dark flight feathers. Time of year is a good clue too, as Rough-legged hawks are most numerous in our area from October through March.

Rough-legged wintering habitat in Kootenai Country Montana usually includes marshes, meadows, wetland edges, open fields and grasslands. In forested territory, they may hunt pothole lake edges, bogs, or openings with shrub fields. Diet mainly consists of voles, mice, and shrews, and these predatory birds may also take young snowshoe hare, ground squirrels, gophers, and grouse. These hawks hunt by perch, pursuit, and pounce. They also employ an on the wing style of flying close to the ground in a flap-like glide before diving after prey. At times, these hunters will hover into the wind, and drop down on their targets. Rough-legged hawks will additionally feed on carrion, and may attempt the theft of prey from other hawks or ravens.     Some unique behaviors of these hawks have been discovered through recent research. One of their calls actually sounds similar to a cat-like mew that lasts from 1-2 seconds, and is repeated 15-30 seconds apart. On an average, this species eats 3-5 small mammals per day. Recent studies show these aerial predators concentrate often on areas with vole burrows, tunnels, and urine deposits. Ornithologists theorize that the hawks may be able to see urine trails and deposits utilizing ultra violet light perception to find areas with abundant prey!

So fellow outdoor enthusiasts, whether your winter birding, cross country skiing, or taking a snowshoe hike this winter, keep your eyes peeled for our unique visiting Rough-legged hawk!