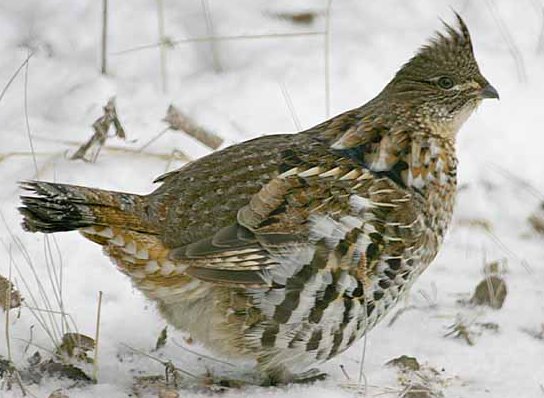 Ruffed Grouse are the most widespread and common grouse in Kootenai Country Montana. In our neck of the woods, the Ruffed Grouse are affectionately called woods chickens. They have a special place in our hearts as they are savvy survivors, make a tasty meal, and bring people together in many ways. Lone hunters, couples, parents and kids, brothers and sisters, and numerous folks both residents and visitors really enjoy the time afield both viewing and hunting this interesting species...

The Ruffed Grouse (Bonasa umbellis) use their camouflage as one of their main survival tools in the wild. Both sexes are similar, having a long fan shaped black tipped tail, black neck ruffs, crested heads and generally brownish bodies. There are subtle differences in the sexes, and males have a small orange-red eye comb. Color variations include a reddish variety and a more common grayish cast bird. These grouse average 18-inches in length, and 20-22 ounces in weight. Winter diet consists of deciduous tree buds and shrubs, and spring to late fall regimen includes insects, green plants and berries such as snowberry and bearberry. Eggs are laid usually in a leaf lined ground depression around mid-May, and hatch approximately mid-June.

These grouse largely prefer second growth stands, lush creek bottoms, and thick alder and brush. Adult birds may spend most of their lives in a two-square mile core habitat. Males can usually be found within a half mile radius of their drumming logs. This courtship display takes place in spring, and the haunting sound that echoes throughout the woods is made by furious wing flaps as they fan out their tails and strut down the log in search of mates and claiming their territory. Grouse will take dust baths in round 10-inch-wide, 4-inch-deep depressions and roost in trees as well as concealed ground or snow pockets.

There are several interesting winter adaptations that Mother Nature provides to help out this species. The feathers on the legs grow thicker and further down towards the feet, and feathers near the head grow extending downward to cover its nostrils which both slows the cold air and warms it before it is inhaled by the bird. Small comb like growths of skin called pectinations appear pre-winter on their feet and aid the walking bird like a pair of snowshoes. Additionally, these adaptations help grouse cling to icy branches as they nip hardwood and brush buds. Scat can resemble these buds, and a solitary grouse trail on snow will appear as a straight line. Tracks average 2-inches long by 2 1/4-inch-wide, are anisodactyl (one rear-three front), and may show some webbing.

Ruffed Grouse are brave birds and a female will mimic a wing injury to take a predator off the trail away from its young. Both sexes may attack animal and human predators in a hopping rush, and there are many animals and birds that predate on grouse. Though shooting them can be challenging as they are fast moving and can navigate through impossibly thick brush and tree cover, their camouflage can fail them dealing with humans, and they end up at dinner tables quite often. Folks come together to hunt grouse, and a fun day can be had by a cast and blast combo of morning fishing and afternoon grouse hunting in Kootenai Country Montana!