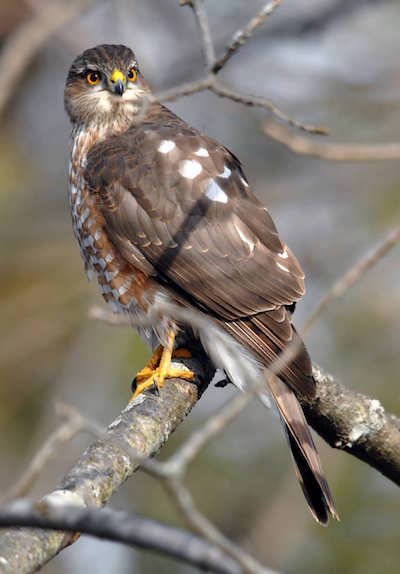 The forest service biologists were out in the field for an observation and training day on fragmented habitat studies. As they were taking notes, a small Sharp-shinned hawk with a long rectangular tail and short rounded wings sped out of the tree line. The predator angled slightly down behind the songbird and appeared to knock the smaller bird behind the head with its shins. In an explosion of feathers, the smaller bird dropped to the ground. The hawk was immediately on it, and finished off the kill...

The Sharp-shinned hawk (Accipiter striatus) is listed as a species of special concern in Kootenai Country Montana. These birds are the smallest hawks in North America, but are very efficient predators. The hawks are about 10-14 inches in body length, and have an average wingspan of 21 inches. Sharpies have small heads, are somewhat delicate looking, and have long dark barred, squared off tails in flight. The small heads do not usually project beyond the wrists of the wings. Color patterns on adults are a slate-blue gray above, with narrow, horizontal red-orange bars on the breast. The iris is a deep red. Females look similar, but are considerably larger. Immature birds are mostly brown with coarse vertical streaks on white underparts and the eyes are yellow.

If flying across the sky in open areas, sharp-shins use a distinctive flap and glide pattern. They may at times circle in the sky. Most often though, they stick to the hunting methods that work best for these agile fliers, which is the quick flights through dense timber and surprise strikes. They will occasionally utilize low perches, and attack from these. Usually sharpies will spend the summer concealed under the forest canopy. Every so often they may visit rural areas with interspersed tree cover near bird feeders or grain fields where songbirds may gather. They feed almost entirely on these songbirds, although they may take small mammals and insects too. Pay close attention if you hear high pitched alarm calls from a group of songbirds as they most likely are under attack by a Sharp-shinned hawk.

Habitat is generally heavy timber, especially even aged conifers but they may also use multi-storied stands and edge effects. Nests are built in thicker timber and are well hidden within the forest. Sharpies occur in Montana year around, but some do migrate also and migration patterns are still under study. Sharp-shinned hawks and Cooper’s hawks can be quite difficult to distinguish in the field. Remember the Coopers are larger, closer to crow sized, have rounded versus squared off tails, and have a larger more rectangular head. The Coop’s also have a huskier body, thicker yellow legs and proportionately larger feet.

But most importantly, know that when you witness that jet fighter attack at high speed that results in a songbird exploding in a burst of feathers amongst the timber, a Sharp-shinned hawk has just completed a successful mission over Kootenai Country Montana.