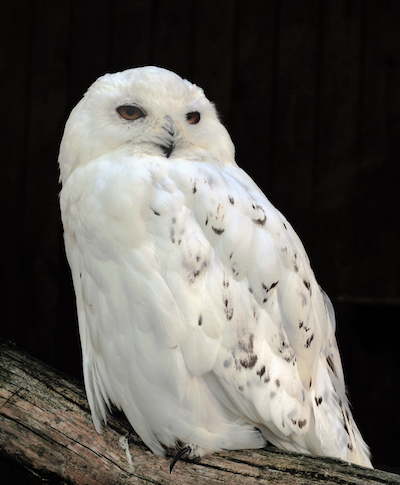 As the Forest Service staff members headed out to their vehicles on a Friday winters evening, a strange thing happened. A biologist and an ornithologist noticed a Snowy Owl approaching the parking lot in Libby. To their amazement, the male, pure white owl landed on the ornithologists vehicle. The Spirit like owl looked right at them, and stayed perched on the roof of the rig for some ten minutes. And then, just as it had arrived, it silently flew off and over the river. Snowy owls (Nyctea scandiaca) are not native to this area, but do travel into Kootenai Country Montana. Snowys come down from their native territory in the arctic during irruptions. Irruptions are basically movements...

of these owls south after a successful breeding season to spread out competition for a limited food source. In this case, these food sources are lemmings, a small rodent native to arctic territory. It is also believed that snowys can irrupt due to food shortages or harsh winters. Generally, these dispersals include a predominance of young males, but all ages and both sexes are represented. These owl movements usually occur on a cyclic rotation, which lags behind characteristic highs and lows of prey populations. Most often, these irruptions start in November in Montana, and continue through February. By March, most of the irrupting snowy owls have returned to the arctic habitats.

These ghost owls are round headed with yellow eyes and a black bill. They lack a true facial disk and ear tufts. Snowys are white birds with varying degrees of dark brown barring and spotting. Adult males are mostly pure white, and females are white based with distinct brown barring. These magnificent arctic visitors are approximately 2-feet tall, with about a 5-foot wing span. Snowy owls are mostly silent during the non-breeding season, but are quite vocal at mating times. Males emit a hoo, hoo sound as a territorial and mating call, but females rarely hoot. If startled or excited these birds may sound off with a hooo-uh, wuh-wuh-wuh sound and assertive snowys attacking make a guttural kruff-guh-guh-guk noise.

In the Arctic tundra, these owls concentrate on hunting lemmings, ptarmigan and small mammals. During irruptions into northwest Montana, they may take western cottontail rabbits, snowshoe hare, voles, field mice, birds, fish, coots, geese, grebes, hawks and other owls. Snowys are also known to hunt muskrats, marmots, raccoons, and prairie dogs. These owls mostly hunt from a perch and pounce strategy, where their silent flight feather design assists in the attack. They often compete for food with other owls, Rough-legged hawks, and ermine, which they may take occasionally. Somewhat unusual for owls, this species are diurnal hunters. They often swallow their prey whole and then perch, regurgitating coughed up pellets 12-to-24 hours after ingestion. Predators of snowy owls in Montana may include red fox, gray wolves, great horned owls, golden eagles, and peregrine falcons.

Interestingly, snowys are densely feathered, including bristles on the beak that help in sensing nearby objects, and therefore are some of the heaviest owls. So, while in Kootenai Country Montana, keep your eyes peeled for these fine feathered friends! One never knows where they might show up between November and February.