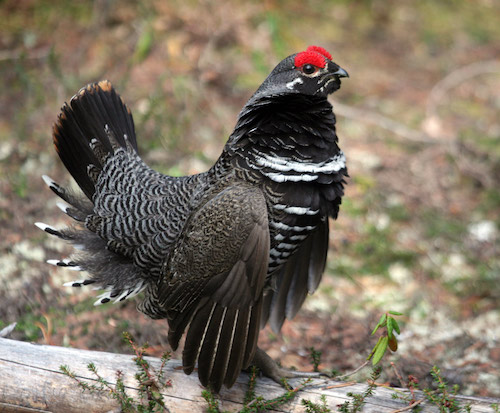 The Spruce Grouse of Kootenai Country Montana has an interesting display mode and inhabits spruce and other coniferous forests. The spring mushroom picker stopped to rest after filling his packs with morels. He chose to rest against a large 36-inch diameter downed log in the old fire site area. Exhausted, he rested his head on the log and began to sleep, knowing that some of the best naps are taken in the woods. After a half of an hour passing, he began to...

dream of distant drums. The drumming seemed to move closer to him. Opening his eyes as he awoke, a smile came to his face as he spotted a beautiful male spruce grouse displaying. The bird was dancing towards him slowly from the other end of the log. The mostly black and white bird was clapping his wings and fanning out his tail. The scarlet red eye comb was showing brilliantly in the sun, and this display was intense. In the blackened forest, the spruce grouse both blended and stood out. The experience was magical, and the mushroom picker savored every moment.

The Spruce Grouse (Canachites canadensis) is native to Montana, and is sometimes called the Franklin Grouse. John Franklin for whom the bird was named was the leader of expeditions into the Northwest Territories in the early 1820’s. Lewis and Clark also recorded descriptions after observing this upland bird in the Columbia drainages of the northwest.

The males are gray and black above, with a black throat and a well defined black breast patch bordered with white. Both sexes have unbarred tails with white tips. Females are extensively barred on the head. These majestic birds are about 16-inches in length and average just over one pound. This may seem surprising, but we must remember birds have hollow bones to assist in flight. Their size is slightly smaller than a roughed grouse and half the size of a blue grouse.

The spring diet usually consists of insects, berries, forbs, and conifer needles, and in winter they concentrate mostly on evergreen needles of spruce, fir, and pine. They store foods in their crop, and sometimes ingest small pebbles to aid in nighttime digestion. Spruce grouse are mainly preyed upon by pine martens, other weasels and many birds of prey including Goshawks that share dense spruce forest habitats where the spruce grouse lives. Golden eagles occasionally will pick off a spruce grouse on the edges of openings in the forest.

The Upland Game bird season for grouse begins in September and the bag limit is three. Visit fwp.mt.gov for specific season dates. These unique looking grouse make an attractive looking mount. The breasts are plump and juicy, and though they may taste a bit like pine needles, they are a nutritious meal. After all, think of the adventure of hunting this exceptional grouse in the spruce-fir forests of Kootenai Country Montana!