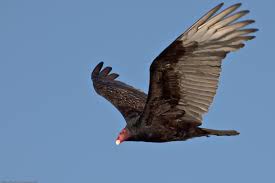 High above the Fisher River Valley of Kootenai Country Montana, a large Turkey Vulture soars. As it does, the wings are in a slightly dihedral position in a shallow V-shape. The static soaring flight pattern on a rising thermal is typical of this bird, only infrequently flapping its wings. When it tips its wings from side to side, the sun highlights the gray flight feathers and a silvery flash is seen in the sky...

This bird, with a wingspan of 65-to-75 inches is most often mistaken for an eagle, but both adult golden eagles and immature bald eagles are slightly larger, soar with wings that are held flat, and have wings that are one shade rather than two-toned. Although this creature is considered a bird of prey, they rarely kill prey themselves. Interestingly, this bird has extremely sharp eyes and can spot prey or carrion from long distances. It also utilizes a keen sense of smell to fly low and detect the gases produced by the onset of decay in dead animals. In this manner, this unique bird can even find carrion hidden beneath a dense forest canopy. The bird is the Turkey vulture (Cathartes aura) and there are many unusual adaptations that help it survive.

The common name comes from the resemblance of the red head and dark plumage to that of the adult male wild turkey. The term vulture is from the Latin word vulturus meaning tearer and refers to the bird’s ability to tear flesh and carrion. The reddish head is featherless, which is an adaptation to keep the head clean while eating carrion. The eyes have a single row of lashes on the upper eyelid, and two rows of eyelashes on the lower lid. The beak is short, ivory colored, and hooked for tearing hide and flesh. The nostrils are perforated to aid in breathing while ripping and ingesting carrion. Although Turkey vultures do not often kill prey, they may take small mammals, severely wounded animals or fish that may be trapped in shallow water. Sometimes, they can even zone in on dead fish that are washed up on shrub hidden banks. The large olfactory lobes of the vulture’s brain help fine tune its sense of smell and lock in on locations of food sources. Vultures will occasionally feed on plant matter, crops, insects, and invertebrates.

Turkey vultures are gregarious, and at times roost in large community groups, splitting off to forage during the day. There is sexual dimorphism, which means both male and female are identical in plumage, coloration, and size. Interestingly, this large bird lacks a syrinx, the vocal organ of birds and usually grunts during courtship. When threatened or fighting over a carcass they will emit a hissing sound. One major form of defense is to regurgitate a foul-smelling liquid of semi-digested meat into the face and eyes of the attacker!

The Turkey vulture has few predators, though Great Horned Owls, Red-tailed hawks, Golden eagles, and Bald eagles may take a juvenile or adult vulture. Often, eggs and nestlings can succumb to attacks by raccoons or opossums. Vulture habitat is generalized, and you may see them drying their spread wings looking pre-historic. But remember the unusual adaptations that allow this bird to survive in Kootenai Country Montana!