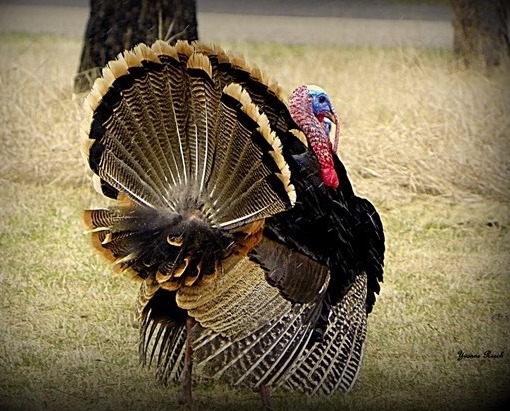 Our largest Upland Gamebird, these birds are savvy inhabitants of our Ponderosa pine forest openings. Officially known as Merriam’s Turkey, named for Clinton Hart Merriam who was the first Chief of the U.S. Biological survey, this species has been introduced in a series of transplants since 1954. Wild Turkeys overall are native to North America. A large sized male can reach 48-inches in length and over 16-pounds, with the record bird recorded by the National Wild Turkey Federation at...

The huge size, iridescent bronze-like plumage and naked bluish head are distinctive. Males have a unique red neck wattle which is utilized for courting potential mates. Large wattles are associated with high testosterone levels, good nutrition and the ability to evade predators. Featherless reddish heads have fleshy growths called caruncles. Adult males are known as toms, juvenile males are called jakes, and females hens. Females are smaller, not as brightly colored, and generally lack the long beards that males have though some may have much shorter beards.     In Kootenai Country Montana, habitat is usually open ponderosa pine forests interspersed with grassy openings and brushy draws. Turkeys are agile fliers in these environs, and they fly relatively close to the ground for a quarter mile or so. They also fly under the canopy to find perches in trees. In spring, male turkeys talk it up to females and announce their presence to competing males with gobbles that can carry for miles and other vocalizations that may include clucks, purrs, yelps, cutts, whines, and cackles. Polygamous males also strut their stuff by puffing out feathers, fanning out tails, dragging wings and spitting. Nests are usually a relatively shallow depression in the dirt that is lined with vegetation.

Turkeys are omnivorous, and forage on seeds, berries, juniper fruits, bearberries, grasshoppers, insects, grass, and roots. They will also feed on salamanders, lizards and snakes. Turkey eggs are predated on by raccoons, skunks, fox and rodents. Poults, or young turkeys may be taken by bald eagles, barred owls, red-tail hawks, and Cooper’s hawks. Adult turkeys may be preyed upon by coyotes, great horned owls, wolves, northern goshawks, golden eagles, bobcats, mountain lions and every so often black bears. However, if cornered wild turkeys can be tenacious, especially the males who may fight off adversaries by kicking using spurs on legs, bite with their beaks, and ram with their large bodies.

Native Americans dined on the eggs and meat of this bird, sometimes making turkey jerky! Indians also performed wildlife burns to increase habitat. Turkey feather headdresses and feather cloaks were prized, and these revered birds were also imitated in dances and considered sacred by some tribes.     So when you run across this noble bird in Kootenai Country Montana, keep in mind it’s intelligence, tenacity, and history, as this will make your encounter even more special!