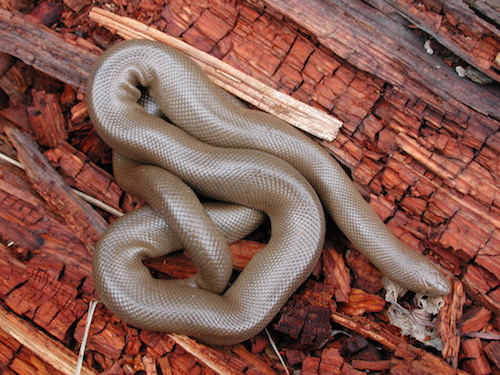 There is so much diversity of nature and wildlife in Kootenai Country Montana that kids off school for the summer never seem to get bored. The Rubber Boa is just one of many of the creatures they find while off on their adventures. Not only do we have a variety of habitat types, but the adaptations of our local wildlife, and the defense systems they employ to survive attacks by predators truly amazes both young folks, middle age adults, and senior citizens. In the boxing ring, there is an old saying that states,...

“You can run but you can’t hide.” In Northwest Montana, we have both room to run and many places to hide.

In the case of the Rubber Boa (Charina bottae), it utilizes both disguise and releasing of a potent musk to avoid and repel predators. This snake looks and feels like rubber, hence the name. It’s a small, stout snake approximately 12-to-32 inches long. The scales are small and smooth, with the exception of those on the head, which are enlarged. The back is a uniform brown or green and the belly cream to tan. Young snakes are a bit tanner to even a pinkish color than the adults on both surfaces.

Predators such as hawks, owls, other snakes, ravens, coyotes, raccoons and skunks may attempt to prey on the boa, but they may be in for a few surprises. Rubber Boas are used to killing their prey by constriction. Voles, shrews, deer mice, salamanders, snakes, and lizards are taken by the boa’s powerful constriction methods. However, Rubber boas are not fast moving snakes. They are secretive, slow-moving, docile snakes, usually found under rocks and logs in either moist or dry forest habitats. These snakes lack many tactics used by faster snakes, but they are far from defenseless.

This boa is semi-fossorial and spends a lot of time underground, but like other snakes generally utilize existing rodent tunnels or rock formations. Commonly, there is a water source nearby, rocks, woody debris and leaf litter that may be used for cover. They are primarily nocturnal, but may be observed sunning on roads, open areas, or trails. In western Montana, this species is usually found in large talus slides or under logs and rocks adjacent to slides; or in leaf litter in deep shaded Douglas fir/cedar forest; and is often found in areas with many flat rocks and near water.

Rubber Boas are typical boas in that they give birth to live young. These are really secretive snakes and are not seen in the open very often. Sometimes female boas are found basking in the sun in the open. They are active from March to November, and in a semi hibernation state throughout winter. Although not often seen, they are probably common throughout western Montana and widely distributed.

Discover the wildlife diversity and predator/prey relationships of these unique species with your kids during our beautiful summers in Kootenai Country Montana! The wonders of nature are there for us to learn about, and in learning we awaken together as it bonds us closer. And look a little more carefully under that rock, there just may be a Rubber Boa in disguise!