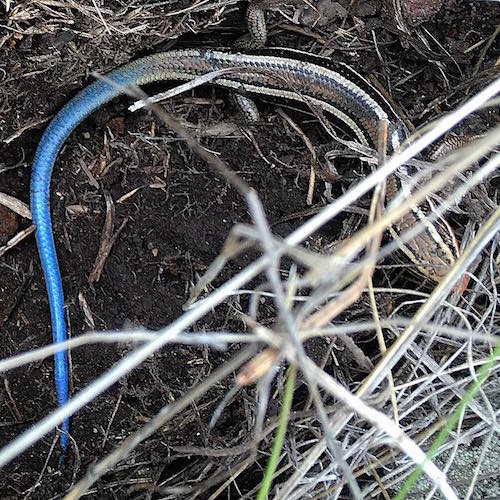 The Western Skink (Eumeces skiltonianus) is a lizard that has smooth, round shiny scales and an elongated head. Adults have a wide, brown stripe edged with black running lengthwise down the back. The brown stripe is paralleled by a light and then a dark stripe on each side of the body. The stripes extend onto the head but fade on the tail. In young lizards, the tail can be slightly blue but the color fades...

with age. Adult body length is 2-3.5 inches on average.

The Western Skink is usually found in dry forests, or micro climates of drier areas in generally moist forests. In Kootenai Country, this can be the Douglas-fir, Ponderosa pine types. These lizards may be seen sunning themselves in open areas. Usually active during the day, skinks are secretive and rarely seen. They are believed to lay 2-7 eggs, but little information is available for Montana. In other locations, the females guards the eggs until hatching is accomplished. The sagebrush lizard is similar, but has spiny scales on the body and tail. The Western Skink is known to occur from only a few locations in northwestern Montana, which makes it a rare species!

If you happen to run into this creature, let the herpetologists in our local forest know! Herpetology is the study of amphibians and reptiles. The word is Greek in origin and means “the study of creeping things.” Although many of us fondly remember catching amphibians and reptiles such as frogs, toads, salamanders and snakes, some of us may still think of these creatures with wonder or fear.

So whether you are working in the woods or recreating, keep an eye out for the elusive skink. You may get your name listed for finding a rare species in Kootenai Country Montana!