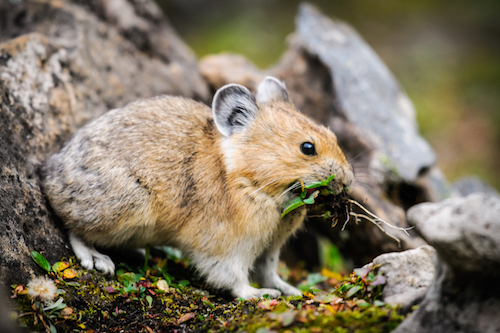 The hiking group was almost to the Cabinet Mountain lake in the southern part of the wilderness area. The leader, noticing some fatigued hikers called a break. Sitting on the large boulders of a tallus slide they rested. Hearing an even toned eeeekk like call they looked up to see a small bunny like Pika sitting on top of a boulder not twenty feet away...

The American Pika (Ochotona princeps) is a small, herbivorous creature that belongs to the order of Lagomorphs which includes rabbits and hares. These bunnies have a small roundish body about 7-inches long and weigh in at approximately six ounces. The males are slightly larger than females, they do not hibernate, and are most active during the day. Though related to rabbits and hares, the front and hind legs are relatively the same length, and the hind feet are short compared to other bunnies. The soles of the feet are thickly furred, except for black pads at the tips of the toes. This species has notably large, sub-orbicular ears. The ears are hairy on both sides, and dark gray with white edges. The inconspicuous tail is sort of buried at times, but actually is longer than most rabbits or hares. The fur on the back is gray to cinnamon color, and in winter becomes denser and a slate gray color. The belly hair generally has a whitish appearance.

These little survivors are often heard long before they are seen. Their signature call is a one to two second squeak like sound, repeated about 3-10 seconds apart. This most common call is emitted in defense of territories, and/or as a defense alarm. Pikas also have several other calls, and a few songs that are utilized during breeding season. Pikas are generally heard and found in or near avalanche chutes, tallus rock, and scree fields. They are often found near meadows, openings and water. In Kootenai Country Montana, they usually inhabit higher elevation zones associated with sub-alpine fir and white bark pine trees. However, they may also inhabit mid elevation zones and even lower elevations if necessary rock cover for shelter, herbaceous plants, and territorial needs are in balance.

Diet is a diversity of green plants, sedges, and grasses, and they usually make caches of food under tallus which involves a process called haying. At times, they may ingest caecal pellets of their own for nutrition. Somewhat elusive and very territorial, the males called bucks, and females called does will defend their 80-foot-by-80-foot territories tenaciously.

Pikas are susceptible to aerial attacks by golden eagles, hawks, and Boreal owls. Other predators may include Canadian lynx, coyotes, red fox, bobcats, weasels, and pine martens. You can bet these predators also listen for the pikas calls in the wilds of Kootenai Country Montana!