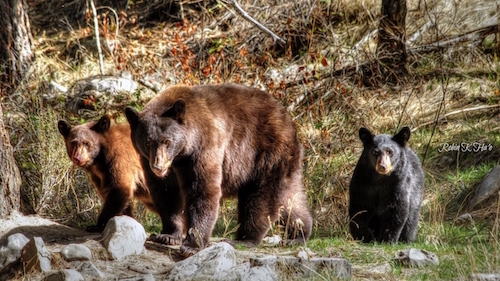 In the hills, meadows and forests of Kootenai Country Montana, the black bear makes quite a home for itself! The Black Bear (Ursus americanus), is the technical name for this beautiful creature, but there are many color phases which they are found!
In our region, the most common coat color of Ursus americanus is black, and quite often there is a white blaze on the lower neck and chest. The brown phase can consist of varying shades of...

brown from a dark chocolate brown to a medium shade of brown with highlights of different tones. The cinnamon bear is really a magically attractive looking ursid, and its fur shimmers as it moves almost resembling the shaking of the spice. The golden haired blond bear certainly catches the eye, and can appear with other color phases in a litter of cubs. Rarely, a reddish - copper toned bear may make an appearance in northwest Montana. In the coastal regions of the northwest United States bordering and into Canada, the unique Spirit Bear is almost pure white with light tan highlights. And the Blue or Glacier Bear of Yakutat Bay, Alaska is probably another color phase of the Black Bear.
The Black Bear has a slight shoulder hump, but the highest point of the body is above the hips. Head and body length combined are about 5-6 feet, and height at the shoulders averages 2-3 feet. Males weigh in between 175-to-475 pounds generally speaking, with females at 150-175 on average. The muzzle appears straight and long in a profile view, and the claws of the front feet are most often dark, curved strongly, and most times about an inch and a half or less. Hind foot tracks are close to 6 inches long, with width at toes averaging 4-inches wide. Front tracks are about 5-inches long with claws included, and the toes in a curved pattern. Drawing a straight line across the top of the anterior edge of the footpad will intersect the toes. This is a good diagnostic clue as grizzlies’ toes are tighter and straighter, and the same line drawn will not intersect the toes.
General habitats in our area include dense forests, riparian areas, semi-open slopes and forest edges. In spring, these bears can often be spotted in avalanche chutes after green up vegetation, and also in fall dining on mountain ash berries. Diet may include grasses, sedges, inner bark of trees, fruits, eggs, carrion, insects, nuts, tubers, insect larvae, berries including bearberry and huckleberry, honey, rodents, young ungulates such as deer, elk, and moose and small mammals. Predation on black bear cubs is known to occur by cougars, bobcats and coyotes. Adult grizzlies may kill black bears. Mature black bears may also kill cubs to initiate additional cycles of reproduction to enhance their own chance of genetic dispersal. Occasionally, black bears may kill each other. Many aspects of predation of bears is still under study.     Black bears are agile climbers, and may den in natural cavities in trees, rocks, under logs, rock caves, or brush piles. They breed at two and a half years and up, and cubs are born in winter dens in January through early March with an average litter of 1-3 cubs. These bears have an exceptional sense of smell, moderately good hearing, and relatively poor eyesight. So while in Kootenai Country Montana, keep your nose in the wind, walk softly, and keep your eyes peeled for black bears in any variety of coloration!
(Author’s Note: Reference - Peterson’s Field Guide to the Mammals-Burt and Grossenheider. I.D. of Montana’s Big Game Mammals, O’Gara.)