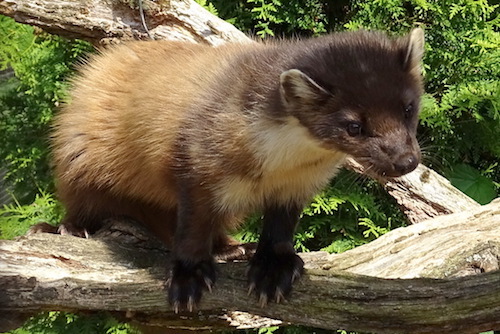 The Pine Marten is an aboreal weasel that inhabits our forests. They are acrobats in trees and very efficient predators. High in the sub-alpine zone, a chocolate brown figure slinks along a white bark pine branch. It’s an older whitebark, probably about 260-years old. The bark on this sentinel is a rough orange and grey. Lime green moss grows in spots on its gnarly, thick branches. Now silent, this house cat size animal is weasel-like in appearance. It has a fox like face, a slightly flattened forehead, and light beige ears and cheeks. A unique sunset orange blaze appears...

on its chest. All four, short legs are a deep dark chocolate and claws are evident. The tubular body is about 13-inches long and a medium tan, with a 9-inch-long deep brown furry tail. The look in its chestnut brown eyes is both curious and fierce.

The Pine Marten (Martes americana) preys upon rodents, voles, shrews, squirrels, snowshoe hare, birds, and partially exist on carrion such as deer or elk found frozen in the snow. Martens often tunnel sub-nivean, or under the surface of the snow to find carrion or to chase down tunneling shrews or field mice. Summer diets may include birds and their eggs, fish, insects, berries of the huckleberry family and thimbleberries. Pine martens are quite capable of running down a branch and leaping several feet to a branch of another tree to continue their pursuit of a pine squirrel. Whether in the coniferous tree canopy or on the ground, prey species have to be fast and agile to escape the tenacious marten. Down logs, dead lodgepole pine horizontal structure and tangled understory trees protect the marten and its young from predators, but provide this woods gymnast with just the right setting for female marten to teach the young to hunt. And they are expert at it!

Martens spend most of their time in the coniferous tree canopy and sometimes occupy deciduous riparian stringers near evergreen forests. Dens are made in trees, hollow logs, and root wads. They are primarily nocturnal, but at times hunt during the day, especially in winter. Mating occurs during summer with young kits born during April. Like many weasels, there is delayed implantation and the litter size ranges from two to four. Pine marten are official Montana furbearers with a legal trapping season.

So when roaming the forests, pay close attention when a Pine Marten leaps across tree limbs and looks at you fiercely as it gives it’s loud chattering alarm. This creature is definitely worthy of respect. You will most notably remember the encounter as another part of enjoying wild Kootenai Country Montana!