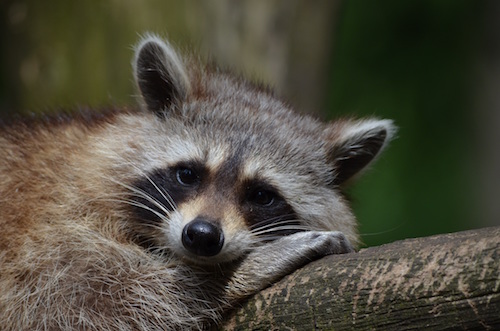 Seldom seen or heard, this bandit of the waterways and wetlands — the raccoonis — more common than one might think! It is midnight on a quiet summer evening. In half moon light along the river, a masked form walks to the edge of the water. With human like forepaws, it searches under the water and mud. Moments later, this furry creature pulls out a large crayfish. It adeptly peels the shell and munches the tasty treat. Silently it skirts the muddy banks, boulders, and logs. In the mud it leaves flatfooted imprints and an alternating trail of five cigar shaped digits on each foot. The bandit...

slips into the reeds at the edge of the wetlands and disappears once again into the night.

The Raccoon (Procyon lotor) is an omnivorous creature that will eat whatever may be available. Raccoon are known to ingest carrion, mammals, birds and bird eggs, reptiles, amphibians, mollusks, insects, grains, nuts, berries, fruits, and agricultural crops. They can be strongly attracted to foods prepared for animal or human consumption, which can get these unique animals into trouble. Raccoons often dunk their food into water before eating.

Raccoons are a medium sized animal about the size of a small dog. Average weight is about 22-25 pounds. Distinguishing features include salt and pepper colored fur with tan highlights, a black mask over the eyes and alternating rings of yellowish white and black on the 12-inch tail. Overall body length is approximately 35-inches. Raccoons walk plantigrade, or flat footed and have non-retractible claws. These specialized animals are related to the Coatis of the southwestern United States and Mexico. Interestingly, fossils of both these creatures date back to the Miocene age.

This species is mostly nocturnal, but can be spotted during the day. Biologists and outdoors-folks highly regard the raccoon’s intelligence, and Native American legends include tales of the masked one’s cunning and craftiness. The coon usually inhabits river, stream, and lake borders near deciduous and coniferous woods, and utilizes wetland areas. Raccoons do not hibernate, but will den in ground burrows during cold spells. Other denning areas include hollow logs, snags, trees, rock crevices and small caves. The raccoon breeds January through March, and an average litter of three are born during April or May. Home ranges generally average about one mile square.

Do not mis-judge this colorful critter. The soft and low twittering sound emitted from the mother can assure her young that things are safe, but raccoons can be aggressive combatants when cornered and extremely difficult to kill. In Kootenai Country Montana they are considered a non-game animal and are perhaps best just observed during the day, and left to their moonlit walks and stalks during the cover of night.

(Author’s note: Reference - A Field Guide to the Mammals; Burt and Grossenheider.)