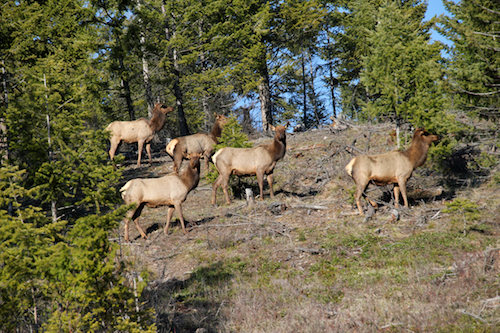 What do you call a 1000-pound animal with an enormous set of antlers that once roamed most of the continent of North America? How do we even comprehend a wild herding creature whom even now still roams its terrain in groups of hundreds or sometimes thousands? Coming up with a respectable new description for a living thing that has already been described as royal, majestic and magical is not an easy task. The Native Americans called them Wapiti, and here in Kootenai Country Montana they are known as Rocky Mountain Elk...

Wapiti loosely translated means large white deer, which is understandable to those of us privileged enough to have a winter’s dawn sighting where the sun is shining directly on an old bull’s light buckskin coat. Younger elk have a brownish hide and the head, neck, and legs are a darker brown on most elk. Both sexes have a dark chocolate, almost black mane which is more pronounced in the bulls. The distinctive rump patch can appear as yellowish or even have an orange tint. The tail is rather small and whitish. Mature bulls can weigh in at 700-1200 pounds, with cows averaging 400-650 pounds. Males have huge spreading antlers that usually have five tines projecting from the main beams and can have spreads averaging 50-to-65 inches with some record holders exceeding 75-inches.
The Rocky Mountain Elk (Cervus elaphus) in our area will graze on grasses, forbs, and sedges in spring and summer, gradually switching more towards browsing on woody shrubs such as serviceberry, ceanothus, and willows as fall approaches. Some young trees including maple, chokecherry, and conifers are also utilized. Elk breed in early fall, and usually one or two spotted calves are produced in the May-June time frame. Main predators of adult elk are wolves, coyote packs, mountain lions, and black and grizzly bears. Canadian lynx, bobcat, and golden eagles will take calves, and wolverine will eat elk carrion.
Habitat for elk changes somewhat seasonally, but mainly consists of coniferous forests and openings of natural meadows, grassy hillsides, old burns, and they tend to utilize recently logged areas that are growing back in. Elk tend towards small herding groups called tribes here, and lead cows will watch over these small herds of cows, calves, and young spike bulls. Older bulls gather and protect their harems, and challenge each other with bugling sounds and antler sparring. Mature bulls shed antlers in March or April.
There is simply no one adjective that can truly describe our Rocky Mountain Elk. One must see, hear, smell, hunt, taste, and feel it’s uniqueness to really appreciate this impressive animal that makes its home in Kootenai Country Montana!
(Author’s Note: Reference - Montana’s Big Game Mammals, Robert Neaves.) See fwp.mt.gov for seasonal regulations.)