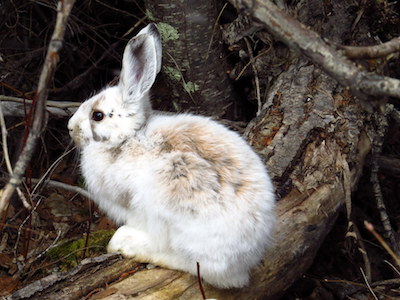 On a quiet winter day, the bunny trails were laid out and packed down from heavy use. The lynx burst from its hunting bed and the snowshoe hare darted and angled its escape route. The lynx took a swipe at the rear end of the hare with its large front paw, but missed. Like a white phantom, the snowshoe hare sped into the thick brush and disappeared. It would live another day...

Snowshoe hares are actually not rabbits, but a different genera completely. The term hare is believed to have originated from the old English word hara. These bunnies turn completely white by winter, but have a brown mid fur, and an underfur that is grayish. They do not usually dig burrows or make nests. Snowshoes are about 15-20 inches long, and weigh 1-3 pounds. The 3-inch-long ears have a white edge, and the tail is approximately two inches long. The large snowshoe like feet are 5-7 inches long.

In Western Montana, preferred habitat is lodgepole pine dominated mixed coniferous stands of trees about twenty-five years old with a brush component and small openings. As far as food habits go, snowshoes dine on succulent plants, ferns and grasses during spring and summer, and in fall/winter utilize mosses, lichens, and low to medium shrubs including mountain maple and others. A telltale sign of snowshoe browsing is a clean 45-degree angled cut, and pellets that are spherical in shape and grainy textured. Additional gel like pellets are produced and may be self-ingested during the day.

Bunnies breeding season usually begins in late February to early July. The first pregnancy often occurs in late March. Hares average three litters per year, and 2-3 young are produced per litter. Gestation period lasts about 30 days. Snowshoes have population cycles of boom and bust every 7-to-11 years. These cycles are in relation to a ratio of food sources and predators.

The snowshoe hare is absolutely one of the most important prey species in Kootenai Country Montana! Canadian lynx rely on this hare for approximately 85 percent of their diet, and they have a specialized predator/prey relationship with this species. Defense mechanisms of the hare include natural camouflage, and they will sometimes freeze in position to avoid detection. They are also quite agile and can outrun some predators with a speedy, darting escape into cover. Though not particularly vocal, they will give off a terrifying shriek if caught.

Almost every mid-sized predator in the wild will take these bunnies, including raptors! The short list would include cougar, lynx, bobcat, wolves, coyotes, fox, fisher, pine marten, ermine, hawks, and owls. Approximately half of these creatures are killed during their first year. Life is not easy for the snowshoe hare in Kootenai Country Montana, and yet, somehow they too survive.