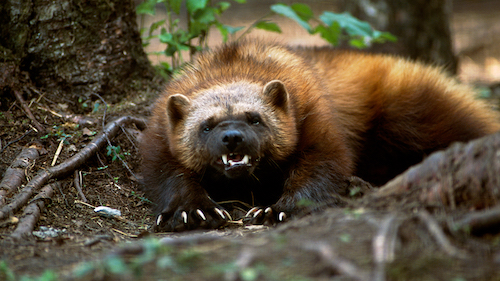 In a more remote sub-alpine region of Kootenai Country Montana a mature male wolverine of five years of age meanders along a ridge trail. It’s mid-June, and some but not all of the snow is gone from the high country. Small islands of white bark pine and sub-alpine fir exist among the rocky ridges and avalanche chutes. It is mating season for this large terrestrial weasel. He will mark his territory with musk from his anal and abdominal glands. His rear feet also have plantar glands with which he marks some of his trail. He will choose elevated logs, rocks, and high spots to...

declare his presence with these musk markings. He will also urinate, defecate, scratch the ground and bite trees. He has been called “The Fiercest Creature on Earth.”

The wolverine’s Latin scientific name (Gulo gulo) means “the glutton.” He is also known by many other names. Cree Indians called him “the one who likes to steal” or “one who steals fur” due to this weasels practice of raiding traplines in the old days. He is sometimes called “skunk bear” because of his habit of marking with musk and urine. He is often called “Indian Devil” and has great importance to Native Cultures. The term “carcajou” has also been used to describe this creature.

Wolverine are primarily scavengers that clean up after more efficient hunter-carnivores such as wolves, cougars, and bears. Technically, they are considered opportunistic omnivores who are somewhat dependent on carrion. So, they may eat both animal and plant materials, but they will seek and find avalanche killed mountain goats and sheep, and also remains of kills by other predators such as mule deer, elk, and moose. In the above cases meat, bone, and hide may be eaten. Molars that are turned ninety degrees perpendicular to the other teeth enable this weasel to crush bone to get at nutritious marrow. In addition, wolverines may take snowshoe hare, pine squirrels, ptarmigan, grouse, and porcupine. Occasionally, they may also take pine martens, weasels, lynx, beaver, or spawning salmon. Summer diet may contain berries such as kinnikinnick and insect larvae.

The tenacious and capable wolverine can actually prey directly on deer family members due to this weasel’s ability to stay on top of the snow utilizing their large footpads and the extra insulation provided them by frost free fur. Therefore, a cold, hungry ungulate that is sinking in deep snow is vulnerable and doesn’t have much of a chance. When necessary, wolverines can kill animals many times its own size. There are many observations and records testifying to wolverine taking on grizzly bear, black bear, cougars, human beings, other wolverines, and also wolves. A one on one wolverine versus wolf would most likely come out with the wolverine on top, but a pack of wolves can be a different story.

Wolverines are not an important food source for other species, and most would not consider it worth the battle! In the wild, the creatures that make a living out there know that even a slight injury can mean death. Witnessing a teeth gnashing, saliva spitting, claw raking, gutturally growling, wolverine is a memorable experience to say the least. And as they say,” Discretion is the better part of valor.”

Wolverines average about 47-pounds and except for the bushy tail, looks similar to a small bear. They are built low to the ground, are compact, strong, and assume a defensive position while protecting their flanks and rear, and are very difficult to attack. They can be a mid-brown to black in color, with a paler head and often have two broad, golden stripes that start at the shoulders and join on the rump. Quite often, they display a whitish or buff patch on the throat and chest. The feet are relatively large in proportion to the body. Length is about 30-50 inches and weight ranges from 33-to-62 pounds.

The most viable and wide spread population in the lower 48-states occur in the Rocky Mountains of Montana! Habitat is generally remote sub-alpine zones and or heavy coniferous forest within or adjacent to wilderness. This Montana fur bearer is managed and protected by regulated fur harvests, and has impressive dispersal distances and mountain/cliff climbing skills. These beautiful creatures breed in summer and den in sheltered places of rock, logs, and in long snow tunnels with false passages in remote terrain. They exhibit delayed implantation similar to bears, and average three kits which are born around March. Recent research shows that the patriarch often returns after birth to teach the young kits about hunting and survival.

If by chance you get to see one of these magnificent creatures in the wild, savor the experience, as you are among the most privileged of outdoor adventurers!