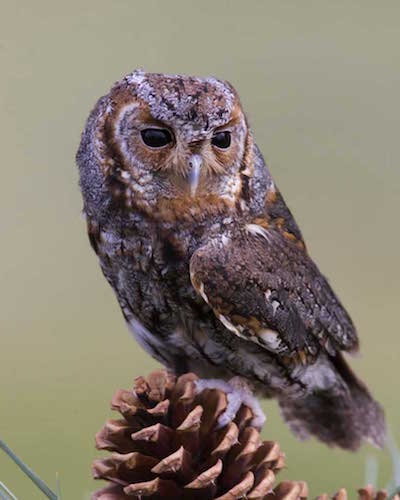 Midnight in the seemingly silent forest. The biologist keys in the audio caller to Flammulated Owl, leans into the wind and calls. The field ornithologist stands on a rocky outcrop on a May evening in elk winter range. There are large diameter Ponderosa pine trees about 30-inches in girth scattered across the semi-open hillsides. Small groups of Douglas-fir trees of twenty inch diameter, and smaller understory trees like tiny islands dot the hillsides near the small draws. The slope is about thirty-three percent and faces south. In the openings, pine grass and elk sedge flourish. The moon is about a quarter slice and it is a bit cloudy. The wind is intermittent, but at about 9-knots from the west...

The habitat for the Flammulated Owl (Otus flammeolus) is not yet known in Montana, but is believed to be mature to old growth ponderosa pine forest with Douglas fir understory, some shrubs including nine-bark and ocean spray, and grass and sedge openings. The researcher is in the right spot. Finding this semi-rare insect eating owl is no easy task. But being in the right spot at the right time is key. The timing is good. Nesting begins in early June. These owls are believed to migrate up from Mexico in May. Nests may be located in natural cavities, broken off snags, or woodpecker holes. The clutch size, or average number of young is usually two-to-four, and incubation is about 20-days. Young fledge, or leave the nest in approximately 22-days. The owls stay the summer, and presumably migrate back to Mexico in October.

In some ways, it is like finding a needle in a haystack. Flamms are only five-to-six inches high, and weigh about two and a half ounces. They have very tiny tufts that are barely visible. The eyes are dark brown and the bill is a grayish/cream color. Some color phases are known to occur, generally grayish in the northern limits of its breeding range, and a reddish-brown in the more southern areas. A facial disk, generally believed to funnel sound into asymmetrically placed ears for pinpointing accurately the position of potential game also corresponds to the color phases. The breast and belly areas are heavily mottled gray, and the back is also a grayish pattern, but with rusty colored shoulder spots. The spots create a line from the shoulders down across the side of the wing, and adds to the camouflaged effect. It can be confused with Eastern and Western screech-owls, however, both of these species have yellow eyes, no shoulder patches, and are of a larger size.

This owl, is a most interesting creature in that it exists primarily on insects such as moths, crickets, grass hoppers, beetles, and others, but may occasionally take a small mammal such as a mouse, vole, or shrew. On the Kootenai National Forest, there are many areas of deer family winter range that are potential habitat for this unique owl. The first Montana nest record was found by a woodcutter in 1986. This species is still under study.

The researcher lets out the call in the wind which is carried across the quiet woods, hills and draws. It is a strange call, similar to that of radio boops, at about two second intervals. This sound, its advertising call, is a combination of a mate search and a territorial claim. The scientist calls for nearly an hour, grows weary and is about to give up. Then a soft, slow radio type beep is faintly heard. Then another at about two second intervals. At the outset, it is only a few responses. Then, as the owls catch on and begin to call each other, the forest is no longer silent. The owl caller is now in a surround sound scenario, with Flammulated Owls calling from all directions! Compass bearings and GPS locations are taken and drawn on the map.

The biologist begins the hike back to the rig. Thoughts of the search for the nesting sites tomorrow reverberate through the field ornithologists mind as the moon wanes. A smile spreads across the face of the researcher. Tomorrow, the job continues to locate Flammulated Owls and their nests. Tomorrow is another day in unique and beautiful Kootenai Country Montana.