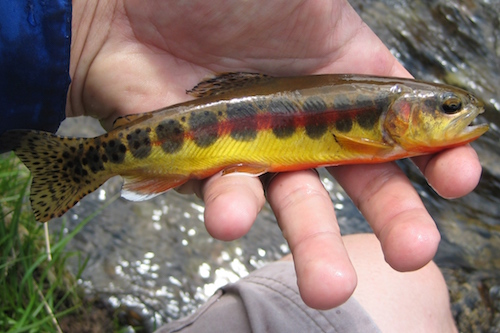 They say “all that glitters is not gold.” In Kootenai Country Montana’s Cabinet Mountains there are a few exceptional exceptions to, or agreements with that statement depending upon how one looks at what you might call golden.  Winter’s dawn on the ice are fantastic sunrises with lots of golds. The iridescent head and neck feathers of the Golden eagle sure reflect a golden color when the sun hits them...

A golden brown patch of morel mushrooms hiding under a burned log can shine like a million bucks to a spring picker. And the tawny golden/chocolate brown mane of the Rocky Mountain elk are brilliant in a fall hunt scenario as the sun shines on them as they browse in openings at first light. The elk meat harvested can be worth a lot more than gold to survive a long cold winter.

Then there is the search for the elusive Golden Trout! The Golden trout (Salmo aguabonita) are usually only found in certain high mountain dream lakes that lay in bejeweled half moon basins and reflect the loftier mountain heights. The sky whispers their names to you as you ascend the trail into the sub-alpine zone of cathedral like fir trees, mountain larch, and mountain hemlock.

The native range of the Golden Trout is limited to a few tributaries in the upper Kern River drainage of California. Sexual maturity is reached at 3-4 years, and females produce an average of 1,700 eggs each.  This species spawns in June/July in most Montana waters soon after the ice breaks the high lakes and many successfully use the inlets and outlets of lakes. The spawning habits of these fish are similar to rainbow and cutthroat trout. Eggs hatch in about 29 days at a water temperature of 58-degrees F. One Montana lake growth rate was 6 inches at one year; 12 inches at two years; and 15 inches at three years where rates dropped even though some fish survived for 8-10 years. There is no information on the record sizes of Golden Trout in Montana, but one fish of 11 pounds was reported in Wyoming.

Diet is similar to that utilized by other trout. Aquatic insects, invertebrates, and terrestrial insects are all important with Caddisflies and midges abundant also in stomach counts. Small fish are also taken intermittently.  Flies and small Mepps or Thomas Cyclones might just do the trick!

Yes, it is true that all that glitters is not gold.  But in the case of our Golden Trout, it glitters because it is the most beautifully colored representative of the trout family. It is gold, because it is one of the most sought after trophy fish anywhere. Just imagine how good it might feel to undertake a relatively long hike into the Cabinets, look up at amazing glacial carved peaks and catch a few of these sought after trophies. Golden, absolutely Golden!

(Author references: Fishes of Montana by C.J.D. Brown and Identification of Montana’s Game and Sport Fishes by Holton and West.)