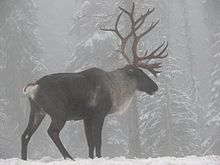 The old timer in his nineties, drew in a long breath as he leaned against his barn in the Yaak territory of Kootenai Country Montana. As he slowly let his breath out, he told of being out hunting with his father in the early 1920’s and seeing a few of the extremely unique Woodland Caribou...

The wise old codger remembered seeing them wandering in the thick, mature forests of the Yaak. He recalled following the small bands, tracking the rounded, pie pan like imprints. He came upon one group that was feeding in an open patch of sedge under the snow free forest canopy. Interestingly, he thought back and mentioned hearing a soft click as each caribou pulled up their hooves. The old man was right.

The soft click occurs when Woodland Caribou (Rangifer tarandus) pick up their feet. The large hooves spread when weight is put on them, and as they lift, the lack of weight allows the hooves to click a bit as they come back together. The tips of the hooves are quite curved, and the tracks are about seven and one half inches long.

These gray ghosts of old growth forests are almost invisible to the human eye in winter. The winter coat is dark brown, with a grayish-white belly, rump, and underside of tail. There is a light band just above the hooves. Appearance wise, the muzzle is wide, the ears short, and the bulls have a thick white mane. Uniquely, both the bulls and cows have antlers. Bull antlers are somewhat flattened, with palmated brow shovels. Male beams extend back and up, then out to the sides, then tip forward to points with palmation at the ends. Females antlers are smaller and round with one or two branches. Bulls can weigh 360 to 520 pounds, and cows are about 250-300 pounds.

Habitat for mountain caribou consists of mature forests and old growth cedar-hemlock in early winter and spring. In summer, they head up in elevation to stands of sub-alpine fir and whitebark pine. At other times of the year, they usually are in spruce-fir stands at intermediate elevations. Woodland Caribou are sensitive to habitat loss due to fires, fragmentation, road building and human activity. Loss of quality habitat may force caribou into poorer habitats where wolf predation and avalanche risks are higher, and nutritional sources are marginal. This can have a negative impact on their overall survival. Normal nutritional diet consists of aboreal and ground growing lichens, sedges, grass and forbs, willows, and softer tissues of woody plants.

Historically present in Northwest Montana, their status is not really known at present, and is still under study. West of Libby, Montana, and only a few more miles west of an area called the Scotchman Peaks, is the Idaho border. Here, a recent study as of mid 2016 in the southern Selkirk Mountains estimates that population at as few as 12 animals. The Mountain Caribou are protected in the United States as an endangered species.

Rumors of sightings of this ghost species are still reported in Kootenai Country Montana, and one never knows what nature may bring, so keep your eyes peeled, and listen for the soft click of hooves.