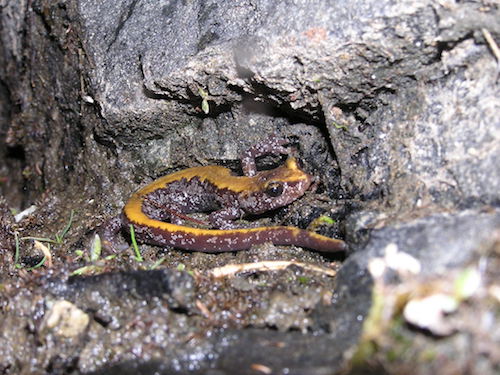 In Kootenai Country Montana, the northwest corner of the state experiences cooler, wetter conditions than most of the state. This can create habitat conditions that are suitable for rare species such as the Coeur D’Alene Salamander. These unique plethodontid salamanders are lungless amphibians and are the only ones in Montana that lay their eggs out of water, and they also breathe through their skin...

The mature salamanders are usually darkish gray to black with either a green, red, yellow, or orange stripe down the middle of the back. The stripe usually has irregular edges, but in some individuals can be even edged. A yellowish throat patch may be found, and adult body length averages two to two and a half inches. This species have fairly long legs, short, stubby toes, and a groove running vertically from the nostril to the mouth. It is wise to examine these small salamanders with a hand lens when attempting identification, due to the fact that they are rare and considered a sensitive species by the United States Forest Service. Although rare, they can be locally distributed and may be abundant in small pockets.     Frequented habitats include springs or seeps, waterfall spray zones, and edges of streams. These unusual looking salamanders may be found in coniferous forest types usually in twenty-five percent canopy cover or more as long as they are adjacent to water sources. Tree species may include Ponderosa pine, Douglas-fir, western larch, western red-cedar, and western hemlock. These terrestrial species loose water through evaporation, and therefore are restricted to cool, damp, environments.

Diet may include insects and other invertebrates including millepeds, mites, spiders, snails, and segmented worms. Predators of this salamander include birds, garter snakes, small mammals and ground beetles. Predation by snakes have been recorded in the Kootenai River Gorge (Wilson 1996) when a 2.5 centimeter tail tip was found in a road killed snake. Other evidence for this behavior was found on the west shore of Lake Koocanusa in Lincoln County, Montana in 1987.

These exceptional salamanders are terrestrial breeders, laying eggs in underground rock crevices. They mate in late summer and fall, and sometimes spring. After a courtship ritual of about an hour, the male deposits spermatophore which is picked up by the female with her cloaca. Females actually store sperm nine months before eggs are fertilized. Usually, six eggs are produced, and young emerge in mid September.

If you are interested in finding these rare salamanders, Kootenai Country Montana is the right place to be looking! Examine the springs, seeps, waterfalls spray zones, and edges of streams ultra carefully with your hand lens. Know your distinguishing features to look for, and you may just experience that special kind of Coeur D’Alene Salamander magic!